SD-WAN and MPLS: It’s a Marriage Not a Divorce

You are here: SD-WAN and MPLS: It’s a Marriage Not a Divorce 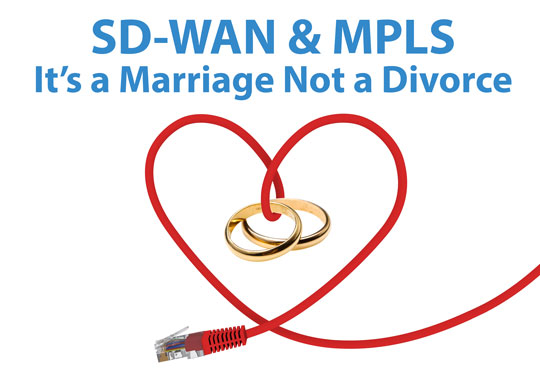 SD-WAN simplifies the delivery of Wide Area Network (WAN) services to branch offices, improving connectivity and WAN management. Research firms forecast a continued bright future for SD-WAN and its near-primacy in the network services market.
The rise of SD-WAN, which has an estimated market value of $6 billion, is a direct result of the rise of cloud applications. Many businesses are adopting cloud applications for the lower costs and easier accessibility, but speed and bandwidth remain an issue.
According to a survey of 160 companies conducted by IDG Connect, a technology media company, landlines and traditional WAN architectures are “inadequate to maintain competitiveness as [businesses] move more of their applications to the Cloud.” But if you’re more of a practical businessperson than you are a tech junkie, you might ask yourself – do you really need it?
Most businesses can see the benefits of SD-WAN, but wonder how they can incorporate it into their current network infrastructure. The thing to know about SD-WAN is this:
SD-WAN isn’t built to uproot the world of connectivity and networking. In fact, it works to support existing technologies, rather than replace them.
Here are some common ways to incorporate SD-WAN technology into your existing network services.

You don’t need fancy network architecture pre-installed to take advantage of SD-WAN. Simply laying SD-WAN’s dynamic path selection capabilities over your existing public internet links can improve real-time applications that run on it. SD-WAN can be used to enhance all connectivity types, including internet, MPLS, and LTE.

Already have failover links? It doesn’t matter what types of links they are, SD-WAN can put them to use without compromising their primary function as back-up links. Think of it like gaining from your car insurance plan without getting into an accident. Instead of letting your back-up links sit there unused, SD-WAN will enlist these paths to provide traffic support for your primary links, improving overall connectivity while getting the most out of your failover services.

No need to purchase private internet lines between branch offices. SD-WAN allows you to build a secure, meshed network using the public internet. You can encrypt WAN traffic and segment your network from your central SD-WAN configuration interface, all without making any changes to your existing network infrastructure.

Many talk about the rise of SD-WAN and the fall of MPLS as if the two technologies are incompatible. This is false. Even if you already have an MPLS network, SD-WAN is immensely helpful because it allows you to add public internet connections to that network with ease. Let’s say you want to open a new branch, but would like to avoid the costs of adding a new site to your MPLS network. With SD-WAN, you can connect new sites to your existing MPLS network using inexpensive public links.
How MPLS and SD WAN Work Together
Enterprise companies with multiple locations have circumvented the unreliability of public networks by building MPLS networks between their branches. But even MPLS is proving insufficient to handle the WAN requirements of today. Cloud applications, sitting in data centers outside of a company’s network, must pass through public networks before they reach businesses. Thus, the value of an MPLS network can diminish when cloud applications are introduced to a company’s operations.Does this mean MPLS has lost its use? Not at all.
Despite its simplicity and speed, SD-WAN cannot compete with the security and reliability of MPLS networks. Many companies have already invested hundreds of thousands into developing their MPLS network infrastructure. But more than anything, MPLS remains relevant because it complements, rather than interferes with SD-WAN technology. Indeed, IDG Connect has found that nearly 40% of businesses are moving toward hybrid models, where SD-WAN broadband is used in conjunction with their MPLS connections.
In terms of achieving the best possible connectivity, this hybrid model makes technological sense. SD-WAN allows companies to use broadband connections to augment their MPLS networks in many ways, enabling them to:

While MPLS remains incredibly powerful, it suffers from high costs and complexity. MPLS lines are scarcer than broadband lines, and take time to provision. With the introduction of SD-WAN, some of these issues can be alleviated. But MPLS will still be necessary for multi-location enterprise connectivity where QoS must be absolutely guaranteed.